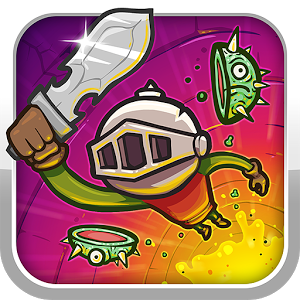 Break through ceilings, rescue princesses and escape boiling lava as you slash your way to the top of the Knightmare Tower!

вЂў "Knightmare Tower hooked me for over an hour, and I had to force myself to stop playing" - Kotaku.com

вЂў "There are triple-A, $60 games that pale in comparison to the enjoyment we got from Knightmare Tower" - GamesRadar.com

вЂў "One of the few games that would be equally at home on the App Store or Xbox Live Arcade" - Eurogamer.net

- 10 princesses to rescue, all daughters of the same King (yeah, even that last one)

- Tons of upgrades, including visually changing armors, swords and boots

- 50+ different monsters to slice up

- 3 legendary monsters that can be summoned with special horns

- Giant bombs that blow apart every monsters around you

- Potions that make you super strong