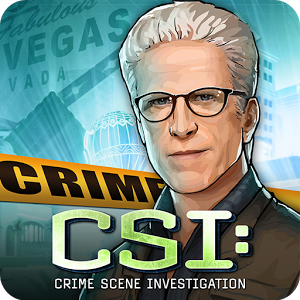 CSI: Hidden Crimes is a Hidden Object Game where youвЂ™ll find the atmosphere of the world famous TV show at the tip of your fingers. Team up with the CSI: Crime Scene Investigation crew to fight crime in Las Vegas!

вЂў FREE TO PLAY HIDDEN OBJECTS GAME вЂў
Discover & explore a crime scene, process it to find clues, analyze them вЂ“ use your brain to patch it all together and get one more criminal off the streets of Las Vegas. Logic & observation will be your key talents!

вЂў A REAL TV SHOW EXPERIENCE вЂў
CSI: Hidden Crimes is written by CSI: Crime Scene Investigation writer Jack Gutowitz.
Feel the excitement of being on a case, find glory in unlocking a game-changing situation, team up with friends to progress faster in game and put murderers behind the bars. But watch out, as with any episode, the unpredictable can always happen!

вЂў STAY ON THE CASE вЂў
CSI: Hidden Crimes brings you new episodes regularly & is accessible on Smartphones & Tablets. Play whenever you want, wherever you need!

About the franchise:
вЂњCSI: Hidden CrimesвЂќ is based on вЂњCSI: Crime Scene InvestigationвЂќ which is a three time winner of the Best Television Drama Series awarded by the Festival de Television de Monte-Carlo, and was named the most watched show in the world for the 5th time in 2012.