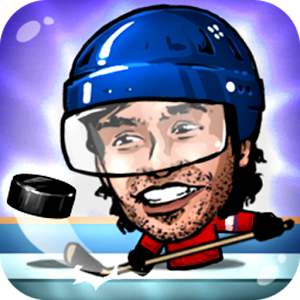 Sharpen your skates, put on your jersey and grab your hockey stick. Puppet Ice Hockey presents new era of hockey fun. This is not some pond hockey this is world class tournamet. Prepare to train overtime, practice slapshots, nofeet body checks, cross checks, aim to top shelf and keep scoring!

Faceoff, crossed sticks, body check, cross check it is all there. Watch out for holding and roughing, your nofeet puppets might look loony, but they can be dangerous.

Get ready for every match. Are you offensive slapshot type? Can you shoot hattrick in top shelf like Jagr, Chelios, Sakic or Forsberg? Handle the stick like Malkin, Jokinen polishchuk, hudler Е†iЕѕivijs or Yzerman.

If you are defensive goalie guy watching your top shelf, you will find your place on the rink. Keep forechecking and roughing and save like Hasek. Catch the puck like Bobrovskij, Laco, Vezina, Brunner or Brodeur.

How good are you in stickhandling? Do you have skill like Tretiak, sawchuk, Cipulis, beliveau, ihnacak, ambuhl, Iginla or Jokinen? Can you skate faster than Modano, Coffey or Malkin? DonвЂ™t get crushed by resurfacer on the rink.

All the best 2014/2015 nofeet players ready to fight for their countries overtime.

Change your controls to suit your style to give your marioneta players the best chance of victory. Practice forechecking, holding, roughing, crosschecking overtime to make yourself a marionette master on the rink. Play nofoot striker, goalkeeper, defense and wing all at the same timeвЂ¦

Ballanced difficulty suits to all players, but this tournament is the best for casual puppeteers, it is easy to hit top shelf with any slapshot. Nofoot puppets hold twig and skate easily around turnbuckle.

DonвЂ™t forget to try amazing splitscreen multiplayer. Imagine duel between Iginla, Chelios, Tretiak, Abdelkader, Backlund, Beliveau, Bellissimo, Berra, Bieksa, Bure, Kontiola, Mackinnon, Hertl, Niedermayer, litvinenko or Gretzky. It would have to be overtime. They would need a cup of coffey.