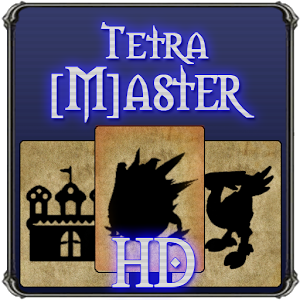 Tetra[M]aster is a collectible card game. Tetra[M]aster is about collecting cards: buy them or win it in battles.
Not only attack and defence attributes matter for the cards themselves as it is in other card games, but also relative position of cards on the field.
Each player has his own deck of cards which is thoroughly picked by him.
In battle, players take turns by placing cards on advantageous cells of the game field.
Each card has name and image of a monster, summoned creature or a weapon.
Each card has attributes of attack, defence, attack method (physical of magical) and direction of the move.
The direction of the move is specified by arrows on the sides of the card. Arrows can be on corners as well as on edges, there can be maximum 8 of them.
The arrow means that if there is an enemy card from its side on the field, it will be attacked.
There's a lot of tactical niceties in Tetra[M]aster, which are to be discovered by each player during the game.
The goal is to capture all enemy cards.
The winner gets one or more cards of the loser.