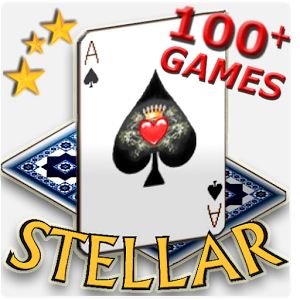 The world's best solitaire program just got better with the release of Stellar Solitaire V2.6.
More than 100 Solitaires. Every one of these solitaires is easy to learn with tutorial demo games!
Automatically Detects both Won AND Lost Games! When a game is over, a single touch can start your next game.
Stellar has NO Ads and needs NO permissions! (NO phone , NO location tracking, NO data mining, etc).
Never accesses the Web : Use Airplane mode to your heart's content.
Fantastic on Tablets!.
Cards for each individual solitaire are sized to best fill your screen.
Stellar often uses different layouts depending on Screen orientation (Landscape and Portrait).
IMPORTANT : Requires a minimum screen resolution of 800X480

Product Feature List :
One Touch Moves, Drag and Drop, or Two Touch Moves.
Demos with Text Assist for all 100+ solitaires.
From a solitaire, play its demo and with a single touch, return to exactly where you left off.
Supports screen rotation (some games are Landscape-only on smaller devices).
Displayed Cards can be modified so that Suit and Rank are as large you like.
Multiplayer (within your single device) - Play mixes of the 100+ solitaires with IDENTICAL shuffles for each player. Supports up to 4 players and 100 games per match.
Right or Left-handed Play.
Automatic Timed Hints + Quick Hints . Unlimited Undo.
Replay, with stop and play from any point (improved on V2.6!).
Enlarging of card columns (by double-tap).
Rollview, a magnifying feature that moves through a compressed card column.
Separately configurable speeds for animation, replay, and Rollview.
Loads of options, both general and game-specific. For instance, Klondike has options to deal 1 or 3 at a time, to set # of passes through deck, and to use relaxed rules for movement within the tableau.
Full help for all games and features.