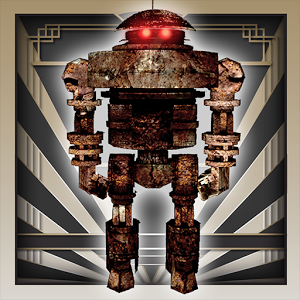 "Graphics are Steampunker's strongest point. The backdrops of locations traversed by our hero, as well as the graphics accompanying the subsequent puzzles and brain-teasers, all create a unique alluring atmosphere. The game is simply stunning.вЂќ - Antyweb.pl

"вЂ¦the artwork is wonderful! If you love Steampunk, you are attracted by the nostalgic, decadent atmosphere that this has. This is an interactive art work as well as a game.вЂ™" - Chiho Komoriya, VSmedia

The adventures of Vincent, our hero, begin when evil robots attack the Earth. The game contains a series of puzzles linked together into a traditional "point and click" adventure story. We meet Vincent in a harbor, then he boards a submarine, travels to an island, flies to the Moon in a rocket and finally fights the robots in their spaceship. In order to complete the mission Vincent has to explore the world and find objects needed to fix the vehicles and move in his unique steampunk style world. The brain teasers include fighting a steam leakage, solving maths puzzles and many more.
The game is simple and intuitive, naturally drawing the player into the main protagonistвЂ™s amazing world.