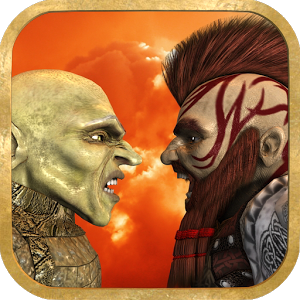 Lead King Thorund the Wurmhewer and his clan of Dwarves against the surging Goblin uprising! Learn Chess the fun and easy way through unique challenges in single player campaign as your Dwarves face Warg Riders, Goblin Raiders, Cannon Trolls, bombs, mortars, and traps! Then challenge yourself in Online Player vs Player (PvP) as either the Dwarven or Goblin army!

The first game of its kind, Dwarven Chess uses the addictive core of Chess combined with 3D fantasy pieces, boards, backgrounds and alternate moves to unleash new strategies in this ancient game! Great for players ages 9-90, levels based on Minesweeper, Sobokan, naval battles, and outpost sieges introduce new players to the fun challenge of Chess, but varying difficulty levels will challenge the masters!

- Dwarven Campaign: 8 unique challenges with 24 levels!
- Goblin Campaign: 7 unique challenges with 23 levels!*
- 30 unique 3D Characters
- 15 unique 3D Backgrounds
- Table-top mode in Standard and Dwarven rules Chess
- Play vs the computer AI in Standard or "Dwarven Rules" Chess
- Play online player vs player in Standard or "Dwarven Rules" Chess!!!
- If you like The Hobbit, Game of Thrones, and Lord of the Rings, you'll love Dwarven Chess!!!!
- Possibly the most in- depth Chess Variant the app world has ever seen!!!!
- *Goblin Campaign is an in-app purchase

"VERY COOL! I have only played the first few levels, but as a player of rpgs and chess, this is really unique and fun. Great job devs!"

"Unbelievable Really, I love it. Congratulations for your idea, very well idea :)"

"Excellent I like it, it is unique not the usual chess games"

"It has LOADS of pieces so I will DEFINITELY put down 5 stars!"

"Great game! None to complain about!"


Dwarven Chess is not just a puzzle game, strategy game, or Chess game- it's all 3 in one! Play your own unique strategy in multiplayer online battles against other chess opponents, or simply switch to Classic Mode and play a standard 3D Chess game. Participate in the storyline war as the Dwarves are suddenly attacked by goblin uprisings, or reverse the tables and play as the goblin army and wage war on the Dwarves! (Goblin Campaign is an in-app purchase). Some levels require strategic tactics to defend the Dwarves, while others are puzzles based on Sobokan and Mine Sweeper. For Chess enthusiasts, see what it is like to not follow classic openings and moves, but to meet new challenges in this "Chess Variant" with environmental obstacles and situational advantages for your AI opponent. Face bomb-throwing Goblins as you help the Dwarven King escape, and set traps in the Dwarven Bear Camp as you defend it from a goblin patrol!

Free to play, "Dwarven Chess Free" is filled with HD quality art, forming over 30 unique pieces all with unique moves from standard Chess. While the download is quite large, "Dwarven Chess Lite" has lower quality graphics, but all the same gameplay with less than half the memory used. 15 different 3D backgrounds and boards make each new challenge something to see, with 3 to 5 levels for each challenge. Face the Ice Ogres and Trolls with your Dwarven Scout Pawns and Bear Rider Knights- all in just one of these glorious challenges! Dwarven Chess is not just for Chess players, but for all fans of fantasy, strategy games, Role-playing games (RPGs), Trading card games (TCGs), puzzle games, board games, and even action and adventure game fans will find fun in all that Dwarven Chess has to offer :)
Tags: Dwarven Chess Goblin Campaign
Android Games
1 533
Download APK:
Direct Download APK from UsersCloud
Download OBB:
http://ul.to/sgrkzzkz
http://turbobit.net/zdliatq2d54t.html
https://userscloud.com/d079rbsyczge
http://www.tusfiles.net/ddirn3uqcix2