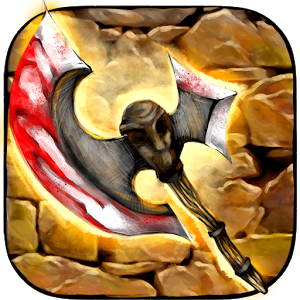 If you love fighting weird creatures in a scary RPG, Hack'n'Slash journey, Nyctophobia is the game for you.
Nyctophobia is all about the dark journey to the core of the Earth of a murdered and swordsman imprisoned in a dark, scary cell for the past 20 years in the creepy Ancient Greece named Nycto.

You are playing Nycto in this RPG, the swordsman that is EarthвЂ™s last hope in the face of hundreds of scary creatures.

Nycto the swordsman is now the last chance of humankind as the Earth was attacked by a huge, abnormal, monstrous creature, a monstrosity who had stolen the magic artifact that kept the world in balance.

The RPG gameplay is straightforward, perfect for mobile phones.

The gameplay in a few words:
1. Find the key
2. Find the door to the next level
3. Fight the monstrous, abnormal, weird creatures that you find in the caverns and dungeons for rewards (better swords and weapons, armors, shield etc)

Detailed RPG gameplay:
You, the swordsman are in a journey to first find a key and then the exit to descent to the next level by moving on a map, a creepy cavern and dungeon while stepping on tiles. The catch is that on the entire journey you are literally in the dark as you canвЂ™t see just a few tiles around you and you have limited stamina.

So, you have to find the key and the exit fast unless you love dying. As you move, you bump into different scary creatures, weird creatures and monstrosities which you can fight and chests that give you upgrades. Also, from time to time you bump into big, ugly, monstrous bosses.

The RPG is a single player, endless creepy journey into caverns and dungeons that get bigger as you go further into the game. So, it basically gets harder and harder. The only way to upgrade to keep going further is to find chests with bonus items like swords, armor and stamina or buy upgrades.

Some of the abnormal, scary creatures you will find in the caverns are monstrous failed genetic experiments that resulted in weird creatures. However, if you are well equipped , these scary creatures wonвЂ™t stand a change in the face of Nycto, the swordsman.