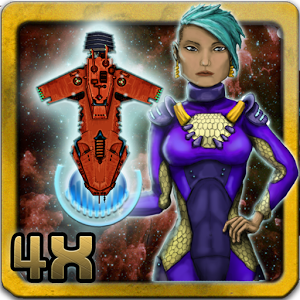 With over 1 million players already immersed in the smash-hit Star Traders RPG franchise, the Trese Brothers brings you an expanded universe like no other in the epic sequel, Star Traders 4X Empires in Exile.

Hostile aliens await you at every turn, while political adversaries from within your own worlds attempt to overthrow your expanding galactic empire. YouвЂ™ll need more than just military leadership to grow your dominance across the intricate landscape of Star Traders 4X.

Take control through the strategic use of spies, economics, politics, technology and advanced weaponry in the most engaging, expansive and intense turn-based sci-fi title that your Android phone or tablet has ever seen.

Rebuild the human civilization from the ashes of interstellar war to become the galaxyвЂ™s ultimate leader in Star Trader 4X Tactics: Empire in Exile.

FEATURES:
* Grow a ragtag band of survivors into a new galactic empire.
* Protect your colonies of galactic refugees from alien attack.
* Employ devious political and economic machinations to expand your domain.
* Use spies and espionage to get the upperhand on your enemies.
* Research and build incredible new ships, weapons and technologies.
* Trade with a vast universe full of rich, dynamic characters.
* Explore the galaxy and uncover its many secrets.
* Multiple difficulty levels and customizable map sizes.
* Risk everything to rescue refugees and keep them safe.

The Star Traders 4X Elite experience allows you to:
* Play on more than twice the maps, including large and huge Quadrants
* Play the Great Houses & Clans - Thulun, Javat, and Steel Song
* Unlock the Elite tech tree and gain access to hundreds of new upgrades
* Battle against twice the alien enemies and AI types

Get ready for the fight of your life in Star Traders 4X Empires.