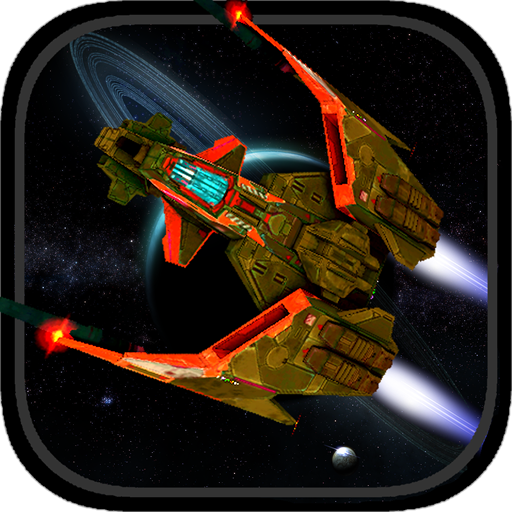 The year is 2150. Time of exploration and colonisation of new planets, bringing chance for new life for many people.
The humanity entered the second half of the millennium with hope to end long-lasting conflict between federal Army of Seven Stars and pirates of Black Flags fraction. In the last decades both sides suffered terrible losses in mutual fights and now the Black Flags members are scattered in the outer parts of the galaxy.
We will yet lose many lives, colonies and planets before the war will be over. Join the heroes of Army of Seven Stars and become a respected legend among your peers.

Space Merchants: Arena is an online multiplayer game where futuristic spaceships engage in intense dogfights or tactical play. After each battle you gain experience (to increase your skills and stats) and money (to buy and upgrade your ships and equipment). You can play against opponents on the same mobile platform as yours (Platform arena) or against players on all platforms (Global arena). Best players are shown in leaderboards and their glory persists to the end of days, obviously. ;-)

[Game modes]
1) Battle - Free for all, 2-8 players, kill and avoid to be killed.
2) Team Battle - Blue vs Red team, 1 vs 1 to 4 vs 4.
- Faarlands map - Teams gain points just for killing opponents.
- Tristar map - There is a central "mining" place where your team can gain a point for each 15 seconds you survive there.
- Jupiter map - Capture the Artefact mode, steal your opponents' artefact and deliver it to your base.
3) Training - Training arena, you vs AI player (bot). Experience and money gains are lower than in normal play against human opponents.

[Switch Arena button]
Hangar 17 (Platform arena) is for playing against players on the same mobile platform as yours.
Hangar 32 (Global arena) is for crossplatform play.

[Special techniques]
Turrets in game maps can be hacked using Turrets communicatior tool obtainable from the shop. Hacked turrets will fight for you and destroy your opponents.
You can also hack you enemy using Hacker Tools. If the hack is successful (depends on your enemy's AI Firewall skill) he will lose control of movement and firing.

[Achievements (23 total)]
For everything you do in game you gain points to your achievements table. There is also special daily reward (experience and money) when you start the game every day.

[Reward points (RP)]
For Team Battle victory each player of the winning team receives one Reward Point. Additional Reward Points are given to Best player (most kills) and Best assistant (most assists).
Player can exchange Reward Points for special rewards such as Upgrade Tools (see below).

[Items Upgrading]
You can use Upgrade Tools to improve your existing weapon, shield or armor.

[Export/Import function]
This function enables you to move your game profile from your device to other device or even different platform.
Export will save your current game profile on our server and wipe it completely on this device. You will receive your secure PIN for import operation.
Import will load your game profile from our server and overwrite your current profile on this device.
This is one-time operation, can not be performed second time.

[Languages]
You can choose your preferred language using Main menu, Settings, Languages. We are working on adding more languages in upcoming updates.

The game should be controllable fine on your tablet or big mobile phone. If you have smaller phone, you can increase your GUI size using Main menu, Settings, Bigger game GUI.