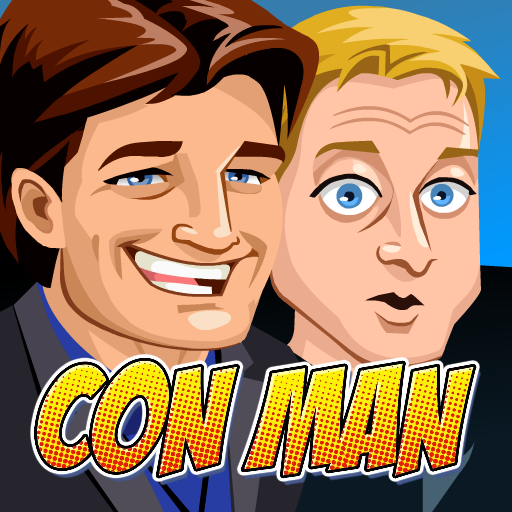 “So you wanna be a comic book convention manager?” asked hardly anyone ever. Well, now's your chance! Enlist Alan Tudyk, Nathan Fillion and the cast of Con Man to help you create the biggest, brightest and bestest con ever: Shock-A-Con! All your favorite management tasks are there: Unclogging toilets! Emptying garbage cans! Even covering up naked grannies!

Based on the hit show Con Man – now airing on Comic Con HQ – the game brings together the cast and characters of season 1 in a convention that YOU run! They will help you with everything, be it placing VIP booths, attracting cosplayers, hiring staff, or defeating marauding aliens straight out of the second greatest cancelled-too-soon sci-fi show Spectrum in a fight to the death (or till someone vanishes in a puff of smoke).

* Work your butt off to keep congoers happy

* Built with the muscle and power of Frima Studios

Note: This game offers in-app purchases, which may be disabled in your device’s settings.

What is New:
All right everyone, this is a big one. Here’s what we’ve added:
- You now have a manager’s office where you can collect and store the rarest of con items!
- More levels! So get out there and get to level 31, or 32… or 40!
That pesky warning sign from Everyplay is gone and the camera is fixed, so start posting videos.
- The whole cleaning staff was out there polishing tables, squashing bugs and, organizing everything. Enjoy!
- (Oh, did I mention the new collectibles?)
Tags: Game
Android Games
1 033
Download APK:
https://dropapk.com/qq5g06k7il1g
Google Play Store:
https://play.google.com/store/apps/details?id=com.monkeystrength.conman