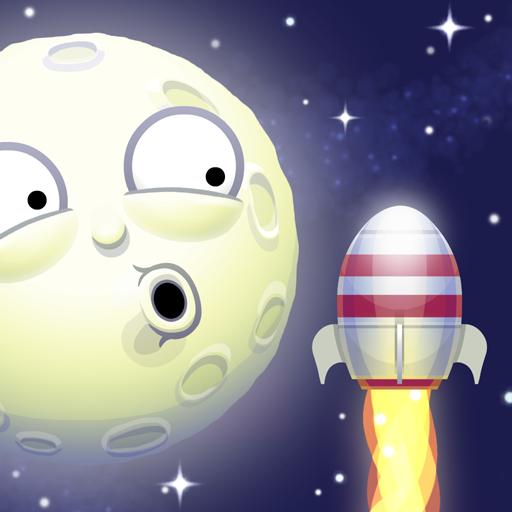 THE MOON WILL NOT STOP SINGING!

Shoot rockets at him to make him stop.

Hmm. That only annoyed him ... Good! KEEP DOING IT.

"A very approachable concept with a whole lot of personality and a surprising amount of nuance." - Touch Arcade
"Anyone will be able to pick up the game and have a blast playing it." - Modojo
"I had a lot more fun than I expected to, which is no small feat for a casual free-to-play arcade game." - 148Apps

Take an animated journey through the weirdest reaches of space...

* Shoot rockets at the angry cartoon moon as it sings to the music.
* Balance risk vs reward. Longer shots = more points. But do not miss!
* Reach goal milestones for extra score bonuses. Try to beat your high score and climb the leaderboards!
* Unlock a bunch of silly costumes! :]
* How mad can you make the moon? Can you make him stop singing?

It's you versus the moon. As you always knew it would be someday.

- This is the original Shoot The Moon by Pipsqueak Games. Simple but challenging! Play this fun high score chasing game for free, now! :D -

What is New:
This is a small maintenance update with a couple of minor bug fixes, plus the following additions:
- You can now sign in to and out of Google Play Games on the options screen.
- Two new costumes: WIGGY MOON and MONKEY KING. :]
Good luck in your noble quest to show the moon who's boss. Remember to go for those long shots! - Shaun.
Tags: Shoot Moon
Android Games
832
Download APK:
https://dropapk.com/mfwafvwjwb43
Google Play Store:
https://play.google.com/store/apps/details?id=com.pipsqueakgames.shootthemoon