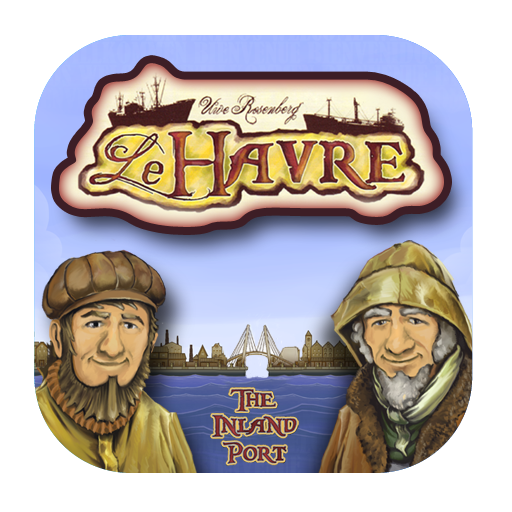 In the award-winning board game, Le Havre: The Inland Port, you and your opponent compete in order to amass the most wealth by building up the iconic French port of Le Havre. The game can be played locally against the computer, in hot-seat mode or online -- competing against friends or global players in order to advance in the rankings. Drop in and out of play anytime and play an unlimited amount of games with your friends simultaneously, when you want, where you want.

Use our convenient matchmaking service to challenge players of your skill level globally or play locally with a friend. You can also defeat one of the different computer opponents with varying difficulty. Friend lists and world rankings are included as well.

Reviews:
Nominated for a Golden Geek: Best Board Game App of 2015

"It’s refreshing from most games where players just swipe or tap and requires some strategy and savvy to win." - fanboynation

"From the perspective of one who never played the physical board version prior, the game is surprisingly engaging." - androidrundown

"This is a very well done game and fun to play." - appreview central

"If you enjoy this game in its physical form or it’s older brother, Le Havre, then pick up this app." - play-board-games

- A perfect conversion of the the award-winning board game
- Comprehensive tutorial and straightforward rules
- Drop in and out anytime and save your games in the cloud
- Beautiful art and sound convey the atmosphere of a French harbor
- Available languages: German, English, French, Spanish
- Worldwide cross-platform leaderboards: Can you take the #1 spot?

Photos/Media/Files & Storage: To save local games on the device.
Full Network Access: To enable online play.

We do not access your call informations or any personal data.

For questions and suggestions we are looking forward to your mail:
support@digidiced.com