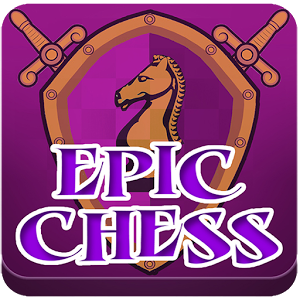 Epic Chess is a treat for both long-time chess fans and those who donвЂ™t know a queen from a pawn. " вЂ“ AndroidAppsReview.com

It is so epic that when the game came out, Chuck Norris started nervously smoking, Robert Fischer began spinning in his grave, and Anatoly Karpov choked on a freshly baked cookie. Puzzle games are boring? Blimey, if it's true! The world of Epic Chess will change your mind!

Take a look. What do you see? Just chess with three-dimensional figures and pretty animation? Muggle, believe in miracles! You're about to see a world of magic! You're no longer just playing a static game and training your brain, now you can test your skills with mini-games!

Think you're smart, huh? Then we've got these special game modes just for you:

Giveaway.
Get rid of them quickly! Do you still have them? You have to hand all your figures over to the enemy as soon as possible!

Treason.
To attack or not to attack? That is the question! Cut down an opponent's piece - you lose a soldier to the dark side. Or to the light, depending on what you're playing.
This is how it works: cut down a black pawn with your white elephant? That's my boy! Now the enemy has one more elephant.

Chapaev (soon).
This is Sparta! Throw the king off the board and you will be the champion of the world! Just make sure to knock off the enemy's king, not your own.

Triple - Test (network mode coming soon)
Are you gutsy enough? Can you handle two opponents at the same time? Find out with Epic Chess! If you can hang both teams by their jewels, we promise you a special prize from the Crowned Crown: a machine for polishing your own!

On 4 players (coming soon)
Take a huge board zapilivaem 4 towers at the edges and add 4 players. As a result, we obtain a steep command mode 2 by 2. This will be epic!

Is it still not enough for you? Is it still not the greatest game ever? Then how about this: you can ChessBattle! Kick everyone's ass with style in Epic Chess!

Aren't you anxious to play it? Man, there's something wrong with you! After all, this is the best thing I've ever seen on my device! Start playing right now and soon your brain will be so mighty, you'd bend forks with the power of thought and your beasty mind will instill fear and respect in pretty much everyone on the block.
Take my advice - just get it on your device!